Alexa Michel from PCC and co-authors were awarded the Thünen Research Prize for Excellence in Target Group-Oriented Work by the Society of the Friends of the Thünen Institute for their concept and realisation of the ICP Forests Brief. 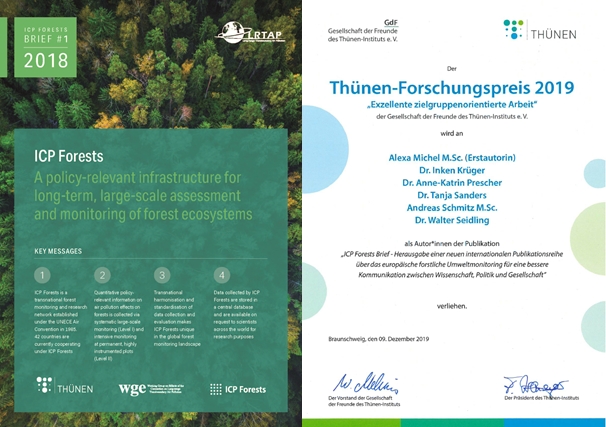 On Monday, 9th Dec 2019, the winners of the Thünen Research Awards 2019 were awarded as part of the first "Thünen Day". One out of five prizes was given to Alexa Michel, Inken Krüger, Anne-Katrin Prescher, Tanja Sanders, Andreas Schmitz and Walter Seidling for ICP Forests Brief: Publishing a new international publication series on European forest monitoring for better communication between science, politics and society. In representation of first-author Alexa Michel, Inken Krüger and Walter Seidling proudly received the prize in Braunschweig, Germany.